Pattara family is one of the very ancient, noble, aristocratic Syrian Christian families of Kerala, with its base at Muhamma a beautiful village on the banks of Vembanad Lake, 15km north of Alappuzha town along the Alappuzha – Vaikom road and opposite of Kumarakom tourist village connected by KSWTC ferry service. Though, most of the family members are settled in and around Muhamma, many members are migrated to Cochin, B’lore and other cities in India as well as Europe and America.

The origin of the family is traced back to  17th century at Kodungallore. It is traditionally believed that, the only son, Varunni, of the ancient Mahadevar family of Kodungallore, embraced Christianity. The orthodox members of the family expelled him from the family and treated him as dead and conducted his last rites in an adjacent property which was gifted to Varunni by the Karanavar of the family. Afterwards this property was known as PATTADA PARABMU. Later Varunni put up his family in this property. Gradually the name PATTADA PARAMBU became PATTARA.

During mid 18th century, there was a mass exodus of Christians towards south from the region controlled by Kozhikod Samuthiri and king of Kochi fearing conversion and persecution. The descendants of Varunni also fled from Kodungallore and reached Purakadu during 1750. From Purakad Shifted to Thathampalli, ( Alappuzha) due to communal violence. From Thathampalli Chandy the son of Chandy and Three brothers shifted to Muhamma (Formerly known as Perumthuruthu.) during seventeen eighties. Sri Chandy settled at, (present) PATTARA THARAVADU. His three brothers also settled at different locations, Chandy Kuriakose at Mattom, Chandy Philip at Vallavanthara and Chandy Ouseph at Puthenpurackal.

Chandy as a young boy, was very pious and god fearing. He was good at studies and was not interested in his father’s business. He preferred to choose the way of God and became a priest in the year 1812

(Details of subsequent generations may be seen at Family tree)

(Scope of this directory is limited to Pattara branch of Pattara family only, for the time being)

At the time when shri Chandy settled here, the catholics of Muhamma and near by area were attached to Kudavechoor Parish and they had to go to Kuda vechoor church through Vemband lake for all their religious needs including Funeral. The journey to Vechoor, 10KM away, through vembanadu lake was very risky especially during monsoon. So the Catholics community of the region pledged to have their own parish here. Shri Chandy Chako, the son of Chandy Chandy, Pattara, inspired by his brother Rev.Fr Alexander Pattara, came forward to donate his land for construction of a new church. Accordingly Chandy Chacko had leased his land for the church on10th Kanni 992 (Malayalam Era) (26th Sept1817) and donated freehold to the church on 11th kanni, 994 (Malayalam era) (27th Sept.1819 ) on the condition that a ‘raza’ for the dead of the family was to be said annually. The foundation stone for the new church dedicated to St. George was laid on this land on the same year. Under the leadership of Rev. Fr. Alexander Pattara, Chandy Chacko Pattara , Chengalanghat Thomman Tharakan and Mathan of Chalangady family, the dream of the people of Muhamma for a church became a reality on (Malayalam era ) 28th of Karkidakom1001 ( 12th August 1826 ). (The above names are specially mentioned in the history of the church narrated in the History of Changanacherry Arch diocese). The church was renovated in the year 1855. The church, facing east, was completely demolished (except the residence and office portion ) in the year 1978 and reconstructed on the same premises and blessed on 07 02 1980.The church has played a major role in the spiritual, social, economic development of the region.

Sisters of CMC congregation established a convent dedicated to immaculate heart of Mary and started functioning on 14.09.1952 within the St. George church premises.

The convent was started at the instance and effort of Sr. Kochuthresia (Clara, Daughter of Shi. Chacko Chandy, Pattara), who joined the congregation on 19.02.1919 and had her final profession on 07.09.1930 and became the Mother General of the Congregation. Later the convent was shifted to the preset Deepthi school compound. Sisters of the convent, is running a school, for the mentally retarded children, boarding about 70 wards, and is one of the best in the state. They also look after the spiritual needs of the community.

Earlier days the elderly members of the family often used meet at one house and discuss social, political and religious issues and settle any dispute between family members. During one such assembly the need for formulating a family association, to provide financial support to the members facing financial crisis, to settle dispute if any among members and to nurture traditional family values in the coming generations came up for discussion. Accordingly The Pattara Family Association ( PFA ) was constituted and inaugurated on 15th August 1969. The family Association also adopted a By Law and a family flag.

The PFA conducts its monthly meeting at every 1st Sunday at a member house on rotation basis. Annual meeting of the association which is a full day programme is celebrated in August. The annual meeting commences with the holy mass for the dead and flag hoisting, followed by competition in sports, arts and literature for the members and the celebration ends with a full family gathering, cultural programmes and dinner.

PFA every year select top scorers in 10th and 12th standard students from the residents of Muhamma Parish and honour them and award cash prize. The association also ear mark a substantial amount in it’s annual budget for the treatment of terminally ill patients.

The brief narrated above clearly indicates the family’s social commitment to the society and the contribution to the spiritual, social, cultural and economic development of the region. The History of the family is closely connected with the history of Muhamma especially the catholic community. 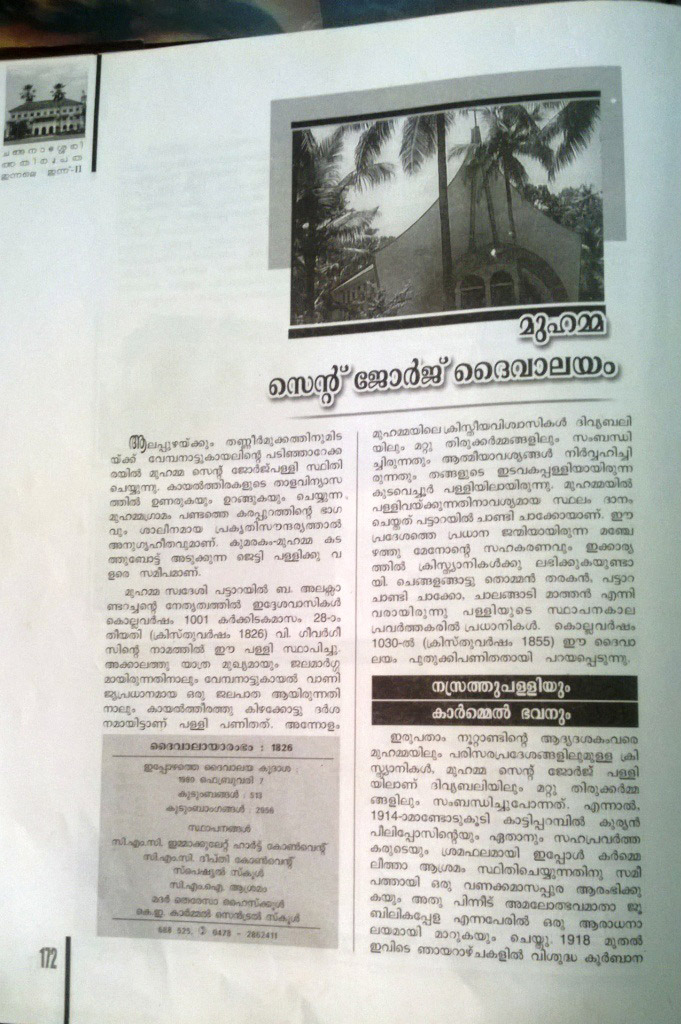 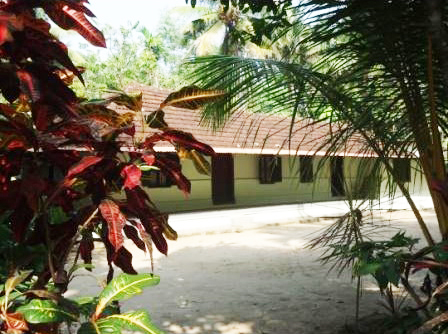 Shri Chandy & Maria The first generation of the family came to Muhamma during seventeen eightees and settled here. All members of the 1st three generations also stayed here. From 4th generation the family branched out- Kizhakeveedu, Koottunkal, Chathamangalam, puthenpura, and pattaratharavadu.

The house was originally constructed as a Nalukettu, with Nadumuttom, Ara ( grainstore) and Nilayara(hiding place). The foundation is with laterite stones and superstructure completely with wood and roof thatched. The house was partially remodeled in nineteen seventies. 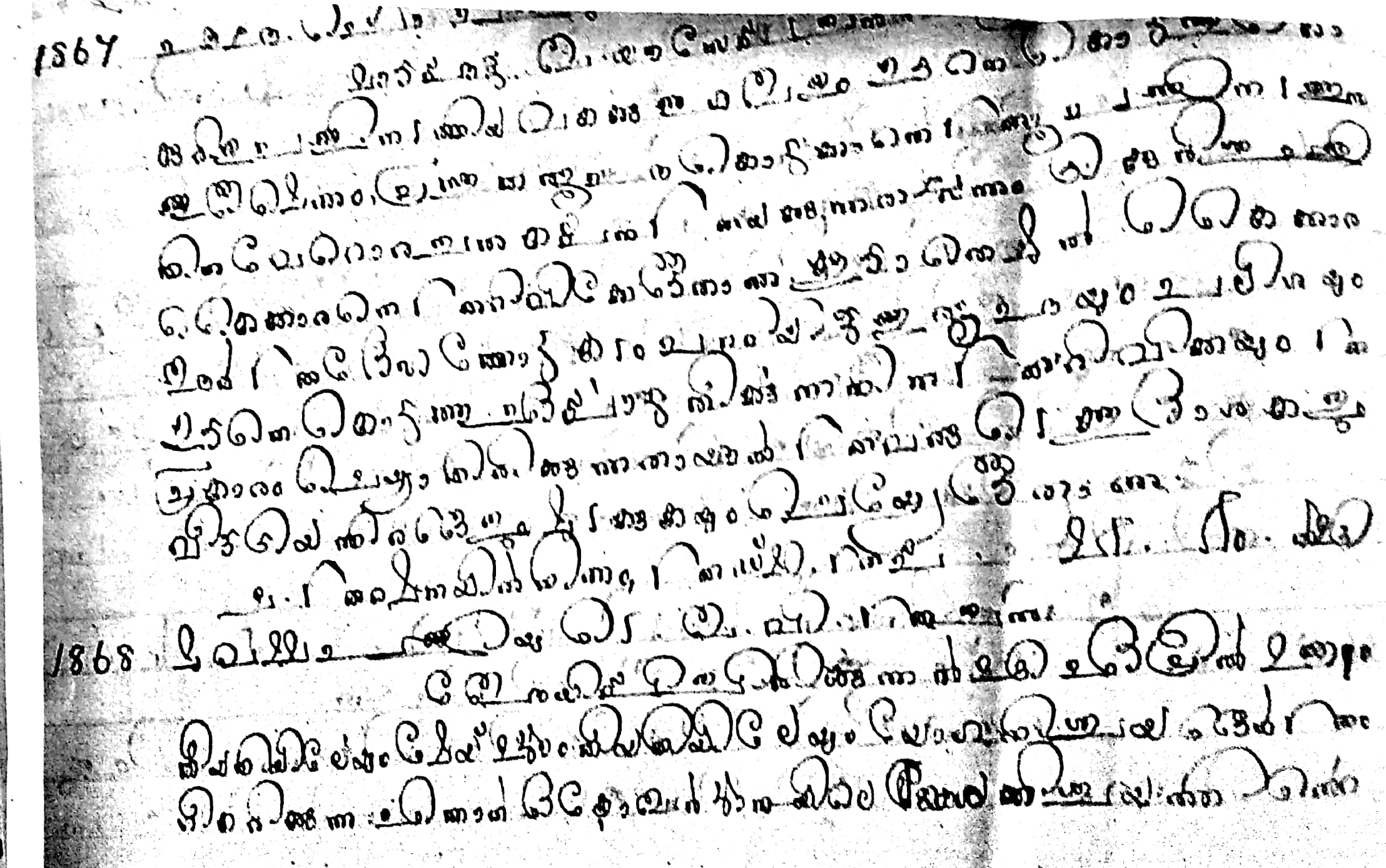