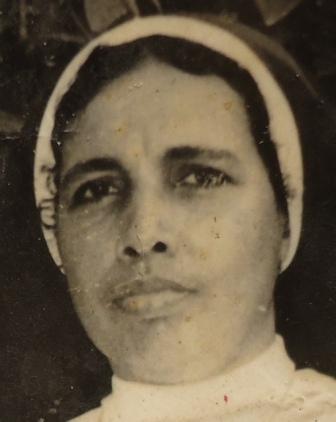 Sr. Loreth, (1931- 1986 )( 5Th generation) - was born on August 6th 1931 as the youngest child of Chandy Chandy and Maria Chandy of Pattara Puthenpurakkal. She was called Thankamma. Thankamma had four brothers, Ousepachan, mammachan, Kuralachan , Vakkachan and two sisters Rosakutty and kuttamma. She had her primary and middle school education at C.M.S. LP School and K.P. Memorial School, Muhamma. Then she joined St. Mary’s H.S Cherthala and completed her high school education. After completing her high school she wanted to become a missionary and joined Mount Carmel Convent Changanacherry as an aspirant in 1954.On the same year on Nov 14th Thankamma received her veil from Mar Mathew Kavukattu. Subsequently she completed her six months postulancy at St.John of The Cross convent, Aarppookkara. In 1955 April started her Novitiate and on 1956 May 18th she had her 1st profession and received the name LORETH. Sr. Loreth had her final profession on May 18th 1959. Very humble and innocent and always with a smile Sr. Loreth was loved and respected by all. She worked as teacher in Little flower LP school Manimala and St. Joseph LP School, Changanacherry. She was also the head mistress of Sunday school for a very long time. Though she was suffering from various ailments, she was very active till the end of her life on March 10th 1986.